For those who would like to know the anti- atlas region better , it is necessary to leave Agadir or tiznit.The reason being that 170km from agadir , or a little more than 100km from tiznit , the road leading to tafraout present a succession of unforgettable images dotted with agadires, the previously mentioned collective granaries, the region is typical of southern morocco with its sparse vegetation .This is a landscape out of which rise huge red granite mountains , the outlines of which appear to have been sculptures by the hands of an artist. it is also possible to make out the tiny villages where members of the llalla tribe live. These people base their economy on wheat and barley cultivation and almond gathering. And since this land is rich in almond trees, a very beautiful landscape is created when they in flower. The undulating terrain indicates that we are in the first foothills of the anti-Atlas .it is precisely in a valley between these mountains that tafraout is located at an altitude 1200m, the capital sof the ammeln Berber tribe , which also gives its name to valley .it is said that the ammeln people have a great aptitude for commerce .The scarcity of rain and the sterile land have forced of revenue to meet their economic needs . it’s not difficult , therefore , to find shops opened by the ammeln other cities in morocco and even in other countries .their proverbial dedication to business means that open their shops very early and closed them last thing and night .At times, the women spend long seasons alone in tafraout whilst their husbands attend to business thousands of kilometers away. On the return, part of the profits goes to buy or repair their houses , the ochre walls of which blend perfectly with the shades of the natural surrounding

DAY1 :
On arrival in Agadir you will be met by my representative who will assist with the short transfer to the group hotel in the city. Depending on your flight arrival time, after settling in you may have the opportunity to do a little exploration in agadir located right by the Atlantic , with the foothills of the high Atlas as a backdrop, agadir is Morocco’s tourist beach resort , par excellence .Agadir ‘s ten kilometers of fine sandy beaches , residential complexes and hotel facilities each year attract thousands of visitors from around the world .Having been almost completely devastated by an earthquake in 1960 , which caused the death of some 15000 people , Agadir was reconstructed thanks to international aid and contributions made by the country’s inhabitants nowadays, it has some 420000 inhabitants and is Morocco’s main fishing port .

The term Agadir comes from Berber and defines a fortified place or granary. Generally , the Agadir are set on elevated terrain to ensure their protection .this could be the origin of the city , although historically there is no concrete evidence as to its foundation up until the beginning of the 16th century .in spite of the fact that it is believed there existed an ancient fishing port nearby, Agadir was officially founded in the year 1505 , when Portuguese joào lopes of segueira constructed a small stronghold named santacruz do cabo de gué to keep watch over passing ships in the area.

Agadir is a modern city of morocco

DAY2 : To oasis of ait moussa
We have an early morning departure for the approximately 120 km drive to the oasis of Aït Moussa. The road climbs gradually above the city of Ait Melloul to cross the Ait Baha plateaux and we pass through a succession of small villages giving panoramic views over the oasis of Bouikhssaine. We stop here for lunch which is prepared by our trek crew who are travelling with us. Afterwards we start the trek following a mule track mostly downhill for approximately 2½ hours to our first camp among the trees.

DAY3 : Trek to Targa toucheka
After breakfast we start the day’s trek with a gradual ascent of around one hour to reach two villages which are perfectly representative of the local architecture. Located in commanding positions, these village-fortresses are dry-stone built without any mortar and contain impressive doors and porches often with finely carved detail. We now descend into the Tazayoute Gorge, which is inhabited by wild boars.

We travel through the gorge and then climb to cross the col of the Tizi n’Timsguida, then descend to the river again for lunch. After our traditional Berber lunch we have a further walk of around 1½ hours to reach tonight’s excellent camp at the picturesque oasis of Touchka (479m). 5 – 6 hours walking with 660 metres of ascent and 400 metres of descent.

DAY4 : Trek to Imzie
Our walk today takes us through several small villages and we will make time with the guide to talk to the inhabitants and learn about their daily lives in this harsh environment. In the latter part of our walk the terrain is increasingly covered with almond trees, which are characteristics of this region and we also pass through a small olive grove as we climb to the village of Imzie. Here we can take tea at one of the local houses before continuing to our camp close to the village at an altitude of 670 metres. 5 hours walking with little ascent.

DAY5 : Cross to Tizi n Tikki to Ait Iften
We trek into the heart of the wild Tagdichte Gorge, filled with palm trees and climb to the tizi n’ Tikki pass (1380m). From the col we descend to the village of Inzguérne which clings impressively to a high cliff and is accessed by a long stone staircase.

We take our lunch by the river (896m) and afterwards trek for a further 2½ hours to reach Aït Iften, at 1500 metres, below the peaks of the Jebel Lekst. 6 hours walking with 1270 metres of ascent and 450 metres of descent

DAY6 : Ascent to jebel lekst
We follow a shepherds’ trail which is sometimes barely discernable over the rocky ground as we climb gradually to the summit of Jebel Lekst (2359m). From the top we have magnificent views over the Anti Atlas and extending north to the High Atlas including Toubkal, and south to Tafraoute and the desert.

These mountains are home to Cuvier gazelles and though they are shy creatures we certainly have a chance of spotting one or two today. From the summit we have a long descent via Anergui to Anamer and our last camp of the trek at 900 metres. 7 hrs walking with 760 metres of ascent and 1360 metres of descent.

DAY7 : Trek to Tafraout and Drive to Agdair
We have our last morning of trekking through a beautiful landscape of lofty crags, palm filled gorges and terraced hillsides, dotted with typical Berber mud-brick houses. After approximately 3 hours we reach the large village of Tafraoute in the Ameln valley.

Tafraoute has a very relaxed feel and is a good place to buy local handicrafts. We will take our lunch here before boarding our tour bus and heading through the Ameln Valley and climbing to the Tizi Mlil. Having crossed this pass the road now turns north west around Jebel Lekst and descends to Aït Baha before levelling out for the final stretch into Agadir.

Transfer time is approximately 3 hours. Arriving in Agadir we check into our hotel and have the chance for a welcome shower before a celebration dinner.

DAY8 : depart to airport in agadir
Its end of my service I hope did you have with us big adventure and nice time with my 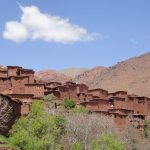 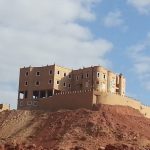