Trekking in Sirwa Mountains has been popular for years, as it offers both a physical challenge and great nature. The nature here is absolutely on the extreme side, as so much else in the Anti Atlas.

Most of it is barren, the mountains are often totally different from anything else you have seen before, and the villages have often been formed in close cooperation with nature.

The goal of trekking here, and for once there is really just one itinerary, is the Jebel Sirwa at 3,305 metres above sea level. The Jebel Sirwa is an isolated volcanic peak, which is quite possible to climb for even inexperienced mountaineers.

DAY1 : Arrive in Marrakech and transfer to your riad. The rest of the day is free for you to explore Marrakech. Spend the night in your riad.

DAY2 : Transfer from Marrakech, first crossing the High Atlas Mountains via the dramatic Tizi n’Test (2100m), then pausing for lunch in Ouarzazate, before arriving at the southern town of Taliwine (1586m). The rest of the day is free for you to explore Taliwine, famous for its saffron production and home to one of the most important kasbahs of the infamous El Glaoui family. Spend the night in a small hotel. 6 hours transfer, approximately.

DAY3 : Enjoy a gentle introduction to your trek by walking from Taliwine along the banks of the Oued Zagmouzen, passing by a succession of small villages, to reach Akhfamane (1250m) where we will camp for the night. 4 hours walking, approximately.

DAY4 : Walk from Akhfamane to Ti n’Iddr (1684m) by following a trail that leads further up valley through the ancient village of Mazwad (1441m). Beyond Mazwad, the valley narrows to a gorge and meanders, more steeply, upwards in to the mountains. Arrive at the beautiful village of Ti n’Iddr with its striking kasbah, mosque and agadir where we will camp for the night. 6 hours walking, approximately.

DAY5 : Walk from Ti n’Iddr to Tegragra (2650m) by following the bank of the Assif n’Wamrane Valley through an increasingly striking and isolated landscape. First, we climb steeply through the dramatic village of Atougha, perched on the hillside against a vertiginous mountain backdrop, its terraced fields unfolding below, before arriving at the stunning summer pastures of Tegragra (2650m) where we will camp for the night close to a water source. 6 hours walking, approximately.

DAY7 : We walk down valley from Waterfall Camp through the delightful village of Tizgui (2200m), stopping to visit its fortified granary, the most astounding in the region, before continuing to the surreal rock formations and verdant palm trees of Tislit Gorge where we camp for the night. 5 hours walking, approximately.

DAY8 : We head on to the village of Tislit, which lends its name to the gorge, then across wide open terrain through a patchwork of agricultural fields and wild flowers to the village to Souk Larba (1675m). If we arrive on a Wednesday we can pause here to enjoy the souk at its busiest. Transfer from Souk Larba to Taliwine. The rest of the day is free to continue exploring Taliwine. Spend the night in a small hotel. 2 hours walking and 1 hour transfer, approximately.

DAY9 : Transfer from Taliwine to Marrakech. The rest of the day is free to continue exploring Marrakech. Spend the night in a simple riad. 6 hours transfer, approximately.

DAY10 : Transfer to the airport and depart from Marrakech. 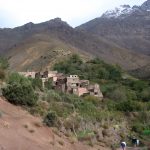 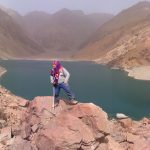