Zagora , a city of th southern of morocco , that we reach after miles and miles of vast palm groves that are aboundant in the draa valley one of the longest river in morocco 1200 km .it lies between the limits of the palm groves of tamata and ferzauta .at the foot of the rock mountain there are ruins of an almoravid fortress of century. ZAgoa is the largest city of this region and has a population of about 45.000 inhabitants and the administrative centre of the region .

the city itself has no special interest , even if the atmosphere at sunset on the main street is amazing for its liveliness.From that area came the saadain , which in the century began their conquest of the valley sous and than of all morocco.

It is located in a beautiful area , with a spectacular backdrop of mountain .One of the most coveted souvenirs is a photographshowing the cartel.toumbuktou 52 days by camel.

DAY1 : Marrakesh – Zagora
8 o’clock departure in a 4×4 from your Marrakesh hotel or riad across the High Atlas Mountains and over the famous Tizi-n-Tichka (2260m) From these mountains, the views over the valleys and the Berber villages perched on the mountain sides, sometimes barely distinguishable from the mountains themselves, are spectacular.

Having crossed the pass, you continue to descend until you finally reach Ouarzazate where you stop for lunch. Afterwards, you will have a glass of tea with us at the office in the centre of town. From there you cross another smaller pass, Tizi-n-Tinfifite, before reaching the head of the Dra’a Valley at Agdez. We go off-road along the ancient caravan route between the mountains and the river, passing many villages and gardens so that you can gain a better idea of the way of life along the oases. You then reach Zagora and the dunes, where you will have a camel ride to watch the sunset and have dinner in the dunes at the bivouac of nomad tents where you spend the night

DAY2 : Zagora – Marrakesh
If you get up early enough to see the sunrise, you will be rewarded by the wonderful play of shadows across the sand. After breakfast you return north, taking another short off-road route. From Ouarzazate, you leave the main Marrakesh road to reach the UNESCO World Heritage Site of Ait Ben Haddou. This Kasbah, the most famous in Morocco, has been used as a backdrop for many Hollywood blockbusters and was one of the most important fortress strongholds on the old Salt Road caravan routes, where traders brought slaves, gold, ivory and salt from sub-Saharan Africa to Marrakech and beyond. From there, you continue along the new and truly magnificent road to Telouet Kasbah, which belonged to the Lords of the Atlas, the Glaoui family, and which now stands in ruins after the last Pasha fled the country following the departure of the French. The return to Marrakesh is along the main road, passing many Berber villages along the river and through the mountains. At times you come down into the valleys to drive alongside the river bordered by oleander and fruit trees. The gardens are full of olives, walnuts, pomegranates, apples, pears and quinces. Berber women and children tend goats and sheep and climb even the steepest slopes in search of fodder and firewood. We reach Marrakesh at the end of the afternoon. 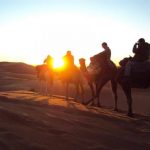 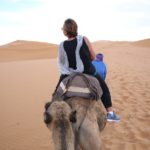